A glimpse on the future of Bitcoin UX

Hi there, I’m Nuno from Bluewallet, a Bitcoin wallet. I’m a UX and Product Designer. And for the last couple of years Bitcoin has been a daily passion, an obsession, and the most exciting thing I’ve come across, since I first connected to the internet.

Usually when I start talking about Bitcoin with my friends, the conversation always goes along the lines of:

Me: “It’s not about that, you see, bitcoin is a protocol where you can build things on top of.”

Me: “Heya, imagine the internet, and services like gmail, facebook and so on. But the internet of money!”

Explaining Bitcoin to your friends is not that simple. The tech is at a very early stage and still has flawed concepts all over the place.

Early this year, after some time of studying Bitcoin daily, I started looking for open source projects to collaborate on. Long story short, Igor Korsakov, an experienced bitcoin developer found me. After some discussions we were a team building what we think will be the next generation of a bitcoin wallet. Later this year, Marcos Rodriguez found our project on Github and immediately joined the team.

It is pretty cool, but trying to build a wallet with a remote team that has never worked together is not easier than explaining what bitcoin is to your friends. Truth is, most wallets suck and the best examples out there are not really there yet or even close to what the technology allows. For sure what the user experience should be, or will be in the future, doesn’t exist yet, and there’s no one who can tell you what it will look like.

The amount of uncertainty, questions without answers, flawed concepts on the protocol, for sure, don’t help. But having an idea of the direction we should go to, certainly helps. That is what I’m going to try to write about, a glimpse on how I see the UX on Bitcoin will go in the future.

Where we are at the moment.

We just started, and after hacking our wallet in React Native (props to Igor), we are now redesigning the main experience and trying to step up the game on what the basic expectations from a user should be for a Bitcoin wallet.

Our first Prototype in Production 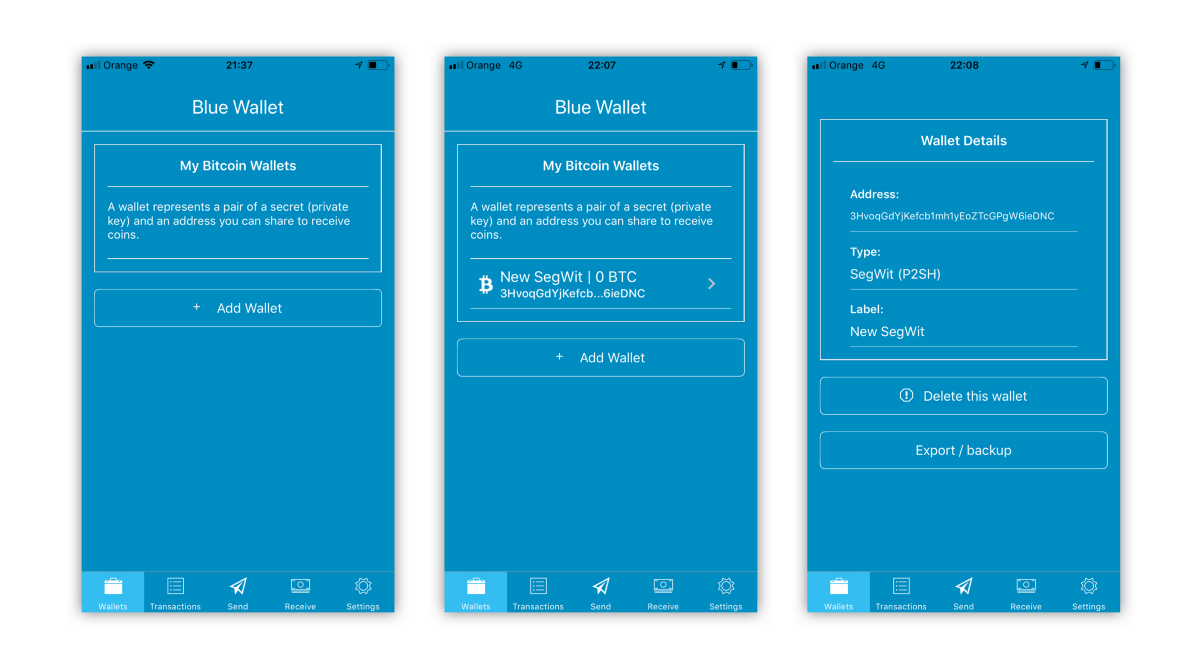 I remember that Igor was not really happy when we were talking about it, and I said something like “looks like a prototype, it’s not there yet…” :D

What we are working on at the moment

After the first iteration and having something working in production that we can get feedback and learn from, we are working on the UI and what the main navigation should be.

Wallets need to step up their game on basic things: like GUI quality, navigation that falls in what users expect from an app and their mental models, etc.

Here’s a little preview on how we plan to do just that.

So pretty much, a lot of catching up is going on a the moment. But we are slowly working on this every day. We will get there!

Also, our lightning solution is right around the corner. Stay tuned for some awesomeness!

What the future can brings us - Part 1

After showing you a bit of the short term future, I’m going to ramble about where can we go from here. Most likely in some years I’m going to be so ashamed of this article that I may find myself crying alone in the dark. Nevertheless the future belongs to the dreamers :D

There was this sentence I read somewhere that completely changed the way I understood Bitcoin. Someone saying “the wallet is the interface, it’s where the users will interact with the network. The wallet is the browser!”.

This completely changed my perspective of Bitcoin. If there’s an interface for the users, then people will be able to build services on top of it. People will build banks, mortgage services, loans services. You can pay for your bills, top up your phone, send money to your friends. This is a game changer.

The way we transfer, keep and secure our personal value will never be the same.

So let’s see how can a first, next generation wallet do that…

In this concept (just a concept) we are seeing a wallet that features a marketplace. Imagine an app (a wallet) that provides the ability for other services to live and be built on top of it. Think about Messenger apps or wechat mini-programs. Where developers have APIs and pre-made Interfaces to create their services on.

A kind of eco-system like this would also solve the common question for wallet builders, “how will you make money from a wallet?”.

Now we have an answer. No problem, you can thank me later :)

At this point you also may be asking yourself. “But this already exists out there?!” Well kind of… There are literally billions of people without access to a bank. Bitcoin brings that access to everyone on the planet. Imagine having a bank account on your pocket, now you (and the rest of people) can have an entire bank!

What the future can brings us — Part 2

Another inherent problem of the Bitcoin protocol concerns identity. For sure privacy will be the next big thing, and many projects are working on that. But people are not numbers, Bitcoin will be more social than ever! It’s a network in the end of the day…

The ability to send money to your friends, pay for your food delivery to your local restaurant, or buy from your favourite shop needs to be easy to do. And, most probably it will be conversational too.

QR codes will die, and addresses will be something users won’t interact with.

At the end of the day, it’s about people and not about the tech. This example aims to exemplify that. Users, services, brands and humans will directly interact with Bitcoin everyday.

This won’t be built in a few days or even in a couple of years. This is a long journey, and the opportunity of a lifetime to build products that will change the future as we know it. Personal and business interactions with value, personal sovereignty and money education are the next revolution!

The most exciting thing since the internet.

We are a team of 3, trying to bring Bitcoin to the people. How can you help?

Thank you for reading and any feedback, comments, thoughts and violent reactions. I’m all yours, see you around!

It’s here! It took us a while. But the Android version of Next →